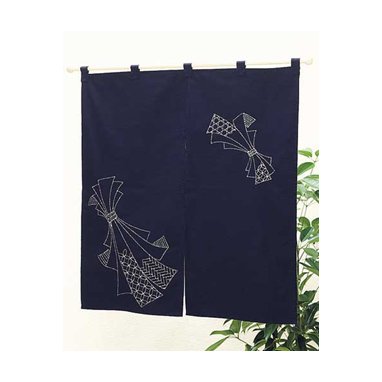 This noren kit is from Olympus and features Noshi Ribbons. It is a pre-made noren ready to be sashiko stitched using the pre-printed design which can be washed away after stitching.

Japanese noren are decorative fabric wall hangings, which are often hung in doorways to separate two rooms. They are sometimes used in Japanese shops and restaurants to keep out dust, excessive sun and wind, and often display the business logo. In addition, they can signify whether the shop or restaurant is open. Noren can also be found in commercial bathhouses, known as sento. Different colours are used for the different genders – blue is typically used for males, and red for females.

Japanese noren are thought to have originated during the Jomon period (12,000 – 300 BC). Their original purpose was to protect households from the negative forces of nature.

With the passing of time, the applications of noren became more diverse. The first significant change in their use was when people began to use them to indicate whether a business was open or closed.

Following on from this, businesses started using their noren as a means of promotion, displaying the shop name and logo or stating how the products on offer were unique to the business. Later, they became popular as a covering for doorways in people’s homes, and since then have been made with a longitudinal split in order to allow a person to pass through.

Nowadays, noren are widely used as decoration rather than to fulfil the functional purposes for which they were originally designed.